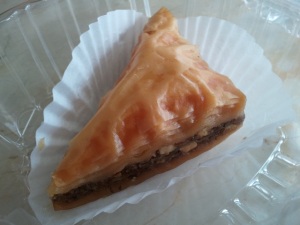 George’s Specialty Foods has been on my We Must Eat Here list ever since C and I moved to Fort Worth, but they have fairly restricted hours and gyros don’t exactly fit into our lifestyle change as a common occurrence, not to mention a mysterious period of time when the restaurant was closed down, so it’s taken us a while to get there.

C and I had our first real date over gyros and Greek salad, so they hold a special place in our hearts.  Of course, on our first real date I had some sort of stomach virus that made me feel violently nauseous whenever I ate.  I’m sure as I sat there and picked at my food poor C vacillated between thinking either I hated gyros (the horror!) or I was one of those girls that wouldn’t eat in front of a boy so as to not seem a pig.  Ha!  Was he in for a surprise or what?

At any rate, we had some business to attend to in the area this past weekend, so we popped in for a late lunch.  First off, the pros: 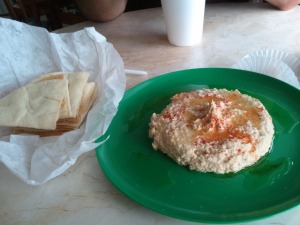 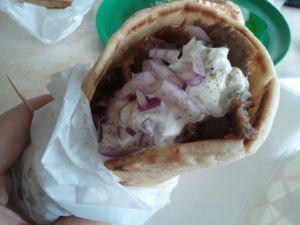 All in all, I liked it.  I’d go back the next time we’re in the mood for gyros and don’t want to drive all the way to Dallas for it.  It didn’t quite live up to the hype I had heard (or maybe created in my mind since we’ve been trying to get there for nearly 2 years), but it was fresh, yummy, and VERY filling.