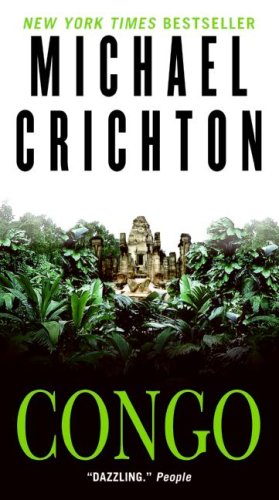 Clocking in about 5 times as good as the movie, Congo, my latest Michael Crichton reread, was a pretty entertaining novel.

A super evil data mining (maybe? that was sort of unclear) company that wants a special kind of boron laced diamonds for world domination (aka money) loses a team in the Congo* rainforests. They send in a back up team led by a young, brash, arrogant, inexperienced leader for her first field assignment (what can possible go wrong here?) who believes that gorillas attacked the first team.  She recruits an animal researcher that has been teaching a young gorilla, Amy, sign language and a mercenary guide to lead the way.  Chaos ensues.

What amazes me about Crichton’s stories is that although he puts his characters into these fantastical and terrifying situations (new breed of killer gorilla, cannibalistic natives, pygmies with poison darts, an exploding volcano – and that’s just in this novel), the thing that always gets them in the end is their own greed and stupidity.  Sometimes I wonder if Crichton really had such a poor view of humanity, and then I read the news and realize he’s going to easy on us.

Just like Jurassic Park, the arrogance of the human species and our intense desire to control nature, rather than to be a part of it, plays a huge role in theme and story here. It’s not surprising that the most sympathetic character is Amy, who remains loyal, brave, and honest throughout the narrative.  But I couldn’t stop thinking about the new Planet of the Apes movies as the next logical step in Crichton’s line of thought about animal research.  I wonder what he would of thought of them.

*interestingly, or perhaps not, the country was actually called Zaire when this book was published but is back to being called the Democratic Republic of the Congo now.  Although the geographical area and river are still just called Congo, hence the name of the novel, I suppose.  What’s with all this name changing of the country you ask?  Well, given the horrendous amounts of foreign intervention (read: stealing of natural resources), the DRC has been subject to civil wars, genocide, and decades of violence over the minerals and trinkets the western world steals. A country that awash in highly desirable goods still has the (one of the?) highest infant mortality rates in the world, low literacy rates, and people dying from malnutrition and starvation.  Just something to think about the next time you consider upgrading to the new iPhone.**

**Seriously, though, and judgement aside as I sit typing this on a computer and checking my emails on my cell phone, it is really hard to rid oneself of any items that profit from conflict-zones or poor labor practices or non-sustainable mining, etc.  But that doesn’t mean we shouldn’t be informed and aware, and at least make out decisions with full knowledge of what our choices mean.  And advocate for change.

1 Response to Congo, by Michael Crichton