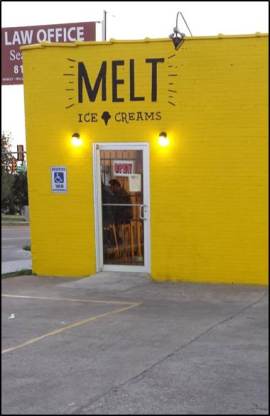 So, Fort Worth has a serious dearth of independent little ice cream shops. There’s frozen yogurt on every corner practically, and Curly’s on Camp Bowie for some (truly awesome but limited in flavor choices) frozen custard, and the ubiquitous Braum’s. But for some straight up boutique ice cream, it’s hard to find a fix. I wanted to try some place called Rita’s but their website is confusing and we went to the (apparently) old address and no one picks up the phone to find out where they are located and I think it’s “Italian Ice” anyway (what is that? accessible gelato?). So when I heard about a new place in the Medical District called Melt, that was actual fun flavors of ice cream made with fresh and local ingredients, I was pretty excited to try it.

That was my first mistake. We went with our friends J & A who, to be fair, really seemed to enjoy theirs (mocha and rosemary pecan flavors). But C and I were pretty disappointed. The ice cream was sort of the consistency of the free stuff you get at Jason’s Deli and didn’t really taste creamy at all. I had a Lemon Blueberry Mint concoction that tasted like plain ice cream with some old mint leaves in it. Nary a lemon or blueberry flavor to hit a single taste bud. C went safe (we thought) with chocolate which was only mildly chocolaty. And maybe this isn’t exactly their fault, but there is something going on in that building that amplifies every single sound. It is LOUD.

The plus sides? Maybe this means more ice
cream will come to Fort Worth! And, their menu was super cute and the flavor ideas (not execution) were good. Also, C really liked the waffle cone. Plus it was relatively inexpensive at $3.50 for a single scoop, but when you consider how much Ben & Jerry’s you can get at the grocery store for $3.50, you start to rethink your choices.

Probably not worth the trip if you’re looking for some excellent homemade ice cream. We’re going to have to make due this summer with the old electric mixer, ice, and rock salt. Bring it on.