Franklin and Eleanor: An Extraordinary Marriage, by Hazel Rowley 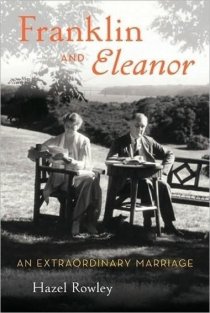 Franklin and Eleanor, by Hazel Rowley, intrigued me with it’s premise of exploring the Roosevelt’s relationship rather than focusing on FDR’s presidency, and I was pleasantly surprised to find that I really felt like I was reading a book about Eleanor Roosevelt and her relationships, including the one with Franklin.

The author makes several comments emphasizing the fact that the correspondence and journals left behind by the Roosevelt’s and their close friends and advisers were heavily censored and that personal or controversial documents were systematically destroyed. Those statements gave the book a slight aura of doubt, but one that was entirely appropriate to reading biographies. After all, when the principles have passed away and the items they left behind were selected to create a specific legacy, much of what is written and said about their true intimate lives must be conjecture. I appreciated Rowley’s candor on that topic.

But I still closed Franklin and Eleanor with the distinct feeling that I had been able to get a glimpse of Eleanor’s wholeness – faults and weaknesses as well as her strengths and passions. Rowley paints a picture of a woman that lived a life shadowed by the disappointments she faced in her parents – becoming a woman that is a bit sensitive and unsure of herself, self-conscious about her looks, about motherhood, and about her standing in a world of powerful men, yet fiercely intelligent and driven and struggling to deal with her frustration in being reminded of (stifled in?) her place as a woman and as First Lady.

Franklin, on the other hand, remains a bit of an enigma to me. I did not finish this book thinking that Franklin and Eleanor had an extraordinary marriage, but more of a trying and exhausting one. Although they were perhaps very progressive in their willingness to allow each other to have relationships with other men and women, it is difficult to see that the relationship they shared was based on anything other than duty. Hopefully respect, but some anecdotes given in the text make me doubt even that. Eleanor, perhaps, was disappointed in Franklin’s unwillingness to be as progressive in terms of race as she felt morally right in order to preserve his status with Southern democrats. Franklin didn’t seem interested in Eleanor’s political work (including the work for him) beyond how it benefited his office and never seemed to recognize her as the adviser she was.

The humanity of the subjects is what makes this biography shine. I found Franklin and Eleanor to be a quick and easy read, and highly recommend.

K’s rating of Franklin and Eleanor: An Extraordinary Marriage: 7/10 mangoes

2 Responses to Franklin and Eleanor: An Extraordinary Marriage, by Hazel Rowley