The Interestings, by Meg Wolitzer 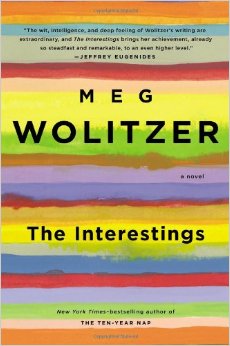 The Interestings, by Meg Wolizter

Our latest book club selection was The Interestings, by Meg Wolitzer, the story of a group of friends that meet at a summer art camp and the directions their lives go as they mature and age.

This is a difficult book for me to review. It was interesting enough (tee hee) but I still didn’t really find myself enjoying it. Although I became much more interested in the story lines as the main characters passed the teenage and college years, it still felt a little too packed to really get to know any particular character well. For a relatively short novel following the lives of 6 friends, it may have been a better choice to focus on a specific period of time rather than trying to handle the scope of 6 individuals and their families over the course of 50 or so years.

In addition to the overall structure, I struggled with a couple of specific problems. Of the 6 friends, Cathy is the one that is given the least amount of time and color. I find this particularly problematic as she was the victim of a rape by another friend in the group, who’s story is visited again and again. Not only was Cathy not believed or supported by her friends (and to the extent she was, it was only secretly and revealed late in the novel), she was very nearly erased from the narrative, too. Disappointing.

I also felt like the diagnosis of Ethan and Ash’s son on the Autism Spectrum was treated oddly. I admittedly have little experience with children (much less a child of my own) that has ASD, but it felt as if the characters were treating the diagnosis very near to a death sentence. I could not relate at all with Ethan’s inability to love his child, nor really with a 40 year obsession with a woman that does not love him.

I’m not sure if I’m just not the target audience for this book, but I didn’t connect with it at all. After getting about halfway through I realized I had read another of Wolitzer’s novels, The Uncoupling. I struggled with that one as well, so in hindsight it’s not much of a surprise.

K’s rating of The Interestings: 5/10 mangoes